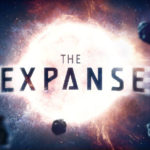 For me personally the Netflix TV-series The Expanse managed to fill a void that was created by what I believe to be a failing Star Trek sequel called Discovery that is also on Netflix. If you are, like me, somewhat disappointed in the new Star Trek series but still feel a primal urge for a really good sci-fi series I would advise you choose to watch The Expanse. You will binge-watch Discovery at some other point in the future when they have completed at least their first season. Trust me, I know what I’m talking about. Go and Expand, screw Discovering. 😉